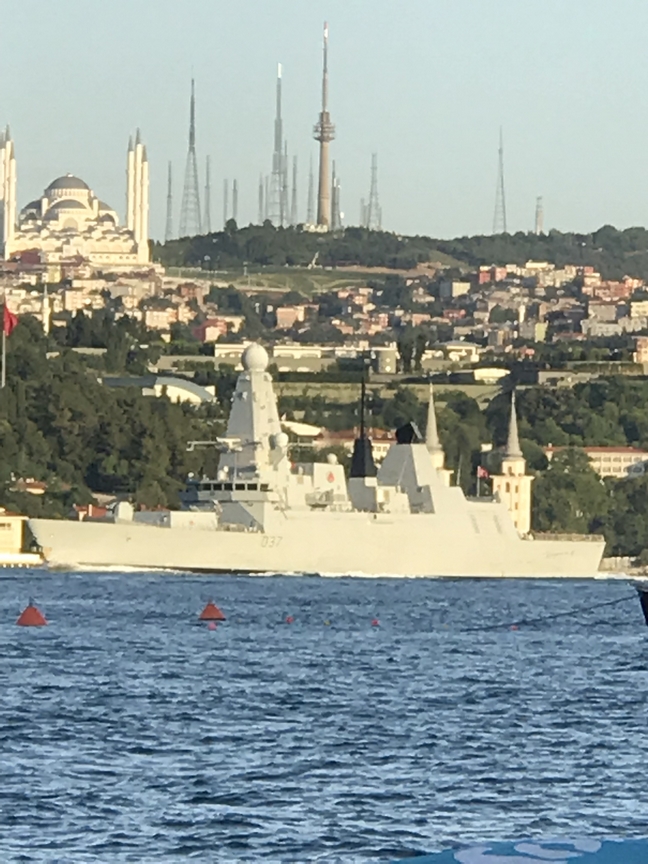 Whilst on holiday in Istanbul we had gone out for an evening stroll with the children. I left my wife and sister in law chatting away watching the kids in a playground. I decided I would have 20 mins spare and so I headed for the water. It was only 30 meters. Anyway I was looking at the Egyptian embassy(or consulate) building as its splendid. That is until you realise its all closed up windows barred. I did not know what it was until looking at the map. Anyway I did not know that Egypt and Turkey are not on the best international relations just now and they have both withdrawn from the others embassy’s. That really to me shows why Istanbul is so ingrained in politics that the west of Europe have no knowledge about. We will come back to that. So when standing looking for something to paint, I noticed a large non Tanker/bulk transport ship peeking around the embassy. I had watched the TV program about HMS Duncan and I found it a really good watch. Especially their confrontation off the coast of Ukraine and the occupied Crimea peninsula. It also showed in the first episode Duncan passing through Istanbul in front of the mosque which is where is now was.

It was small in the distance but Duncan’s unique shape quickly said to me this could be Duncan. I shared a photo my relative in the UK(I wont name him) but as he was in the Navy for a long time serving so he was the man to ask I wont name and he said yes its Duncan with a simple “YOU GOT IT”. I then returned to taking lots of photos and videos. Where she was off too? I had no idea but with the news that is going on with the Gulf Oil Crisis its pretty clear that this had just been re tasked.

Use this Image browser to scroll through all the photos.

I have made a Video with the images following on but its too large to load so a shortcut is below.

So additionally with the current Gulf situation there was a ship in Harbour that was recently destroyed by fire. The phots shows a very damaged bridge but the strangest point was why had the name plate been spray painted over. Is there any connection to Duncan being in the area and the clear hostage taking and bombing on non military vessels? Who knows but any comments grateful.

Now my Sister In Law’s appartment had the most amazing view indeed a room with a view.. (working on a painting soon)

Scott Sibbald I use self led art therapy for chronic pain. My daily battle with pain originates from multiple spinal surgeries the second produced failed Back Surgery Syndrome and combined with Disc Degeneration leaves me in constant pain and reduced physical ability. With painting, creating and my extended but small family gives me the strength to fight on daily. Newly discovered the Spoon Theory and new Spoonie! View all posts by scottsibbald

This site uses Akismet to reduce spam. Learn how your comment data is processed.